Unfortunately with air cooling, I couldn't get it above 1.35 volts without reaching a thermal limit. But, I am stable at 1.285 volts, 4.8 ghz, which is a very good overclock for this chip (20%). About 7 years on, there is still plenty life in my Haswell for modern gaming. My 1080ti is dying (it's down to one HDMI port so VR is becoming difficult) but I may just upgrade to a modern graphics card and keep this beautiful processor. 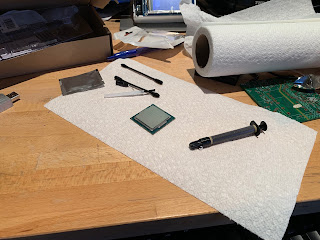 The processor and the tools for the job 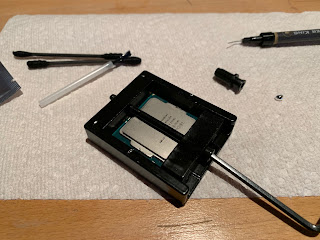 Using an OwlTree vice, pried the integrated heat sink off of the processor 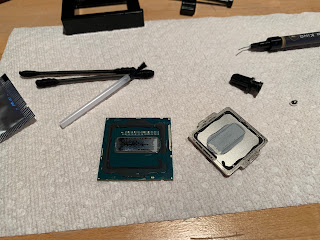 The processor with the crappy "toothpaste" thermal grease 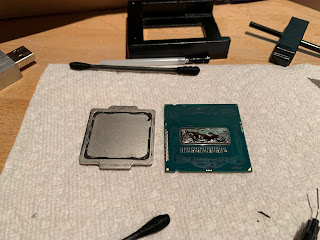 I applied way too much liquid metal the first time around. It should not look like this! I put it in my PC and it did not boot up. 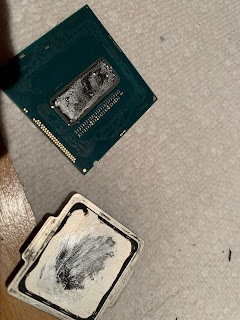 So I took it out and removed most of the liquid metal. There should be a very thin layer. Unlike traditional thermal paste, you want to spread evenly, but you don't have to worry too much about bubbles forming.

The hardest thing about using the Athlon XP processor is not just that it's 32 bit, but it lacks support for the SSE2 instruction set. This means most programs compiled after say 2008 are not going to work on it, even if they are 32 bit. I believe Microsoft even dropped support for disabling SSE2 in Visual Studio after a certain point, so it may not be possible to recompile many of these programs even if the source code is available.

If you want to get on the web, you have a few options:

1. Use an old version of FireFox

2. Use an off-brand browser.

PaleMoon did have a non-SSE2 fork running for awhile, but I think this was discontinued around 2017. If you keep Googling non-SSE2 browsers, don't be mislead by anyone recommending PaleMoon.

K-Meleon for Windows works pretty well. It's not as good as Firefox, but is hypothetically more secure because it's actively maintained.

Few versions of Linux will work on an Athlon XP. LXLE does not install, likely because of the SSE2 problem. MX Linux does! I'm new to this distro but it's Debian based and works rather well.

On MX Linux, I was able to install NetSurf, which is still maintained yet a fairly old school browser. I was also able to run K-Meleon through Wine and browse the web just fine. With a modern operating system and an up-to-date browser, I'm actually able to use this ~18 year old computer for most tasks. I really hope this software continues to be maintained. 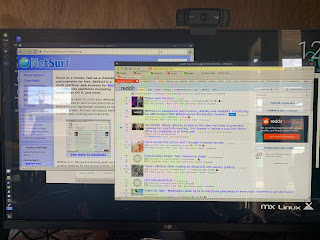 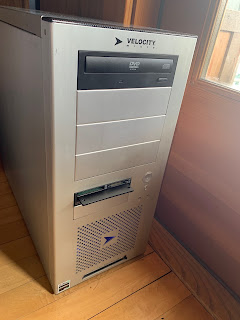 The case, with a new Athlon XP badge