I have gotten back into overclocking lately. The concept fascinated me since I started building computers as a preteen. The process of tuning a machine is both rewarding and relaxing, and the engineering that goes into cooling, overvolting and modding hardware has become an art form in itself. It also appeals to my frugality. When I own a computer, I don't usually want the best parts - I usually want the best performance out of the parts that I have.

With the recent silicon shortage, there are two different ways that PC builders are reacting. One group is moaning about price hikes, scalpers and wait times. Another group is taking matters into their own hands and squeezing every bit of juice that they can out of their parts. You can tell which group I admire. If you head over to reddit's overclocking forum you will see how often necessity has become the mother of invention. My absolute favorite posts are zombie cards like this one - where people combine components from multiple video cards into one.

So I started with my main personal/gaming PC, which I will cover in another post. I've tuned that as far as it can get, and it handles modern games very well. But I wanted to keep tinkering, and wasn't willing to build a new modern PC. So I decided to go back in time.

There are many ways to demarcate different eras in PC building. Hardware changed rapidly throughout the 90's and 2000's. I chose 2002-2003 for this build mainly because I wanted to experiment with hardware that I never really owned before. This was about a year or two before I really got into PC building. I also wanted to play games from that era (SimCity 4, Half Life 2, etc) on period hardware.

Note that the goal is not to build the best computer with 2003 parts that I can. This is more about tinkering and amusement.

The overclocking king at the time was the Athlon XP-M. These are processors meant for laptops that you could actually purchase and put in a desktop motherboard. There were two reasons why these were great overclocking chips:

1. They were rated for decent speeds at low wattage, so when you cranked up the wattage to desktop levels, you could reach much higher speeds than the chips were intended for.

2. They had unlocked core multipliers to support AMD's PowerNow! frequency scaling, a power-saving technique for laptops. Unlocked clock multipliers are highly appealing to overclockers who would otherwise be limited to manipulating the front side bus.

So I decided to build this around a Socket A/462 motherboard, with an Athlon XP-M inside. I also wanted to get an good overclocking graphics card, which I'll cover in another post.

Case - I found a cool aluminum case that is probably not quite the right vintage (it has a Core2Duo sticker on it) but I liked it, so I bought it - RE-PC $30 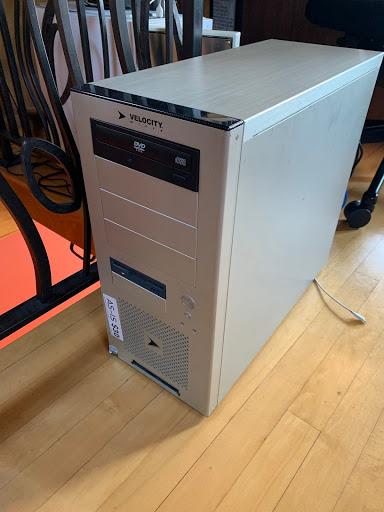 Motherboards - Most of the discussion from the era seems to prefer nForce2 chipsets over VIA, so I went for nForce2. nForce2 tends to have slightly better overclocking options available in the BIOS. However, unlocking multipliers above 12.5x will probably still require a pin mod. (Hopefully I actually get to use this pin mod technique though because it's really cool).

BioStar M7NCD - eBay $50 - Came with 1.5gb RAM and an Athlon 2000+ and a crappy GeForce FX5200 graphics card, sold untested and as-is. Everything worked out of the box. Although I'm only using the RAM and graphics card from this purchase, it's nice to have the rest of the parts as a backup. 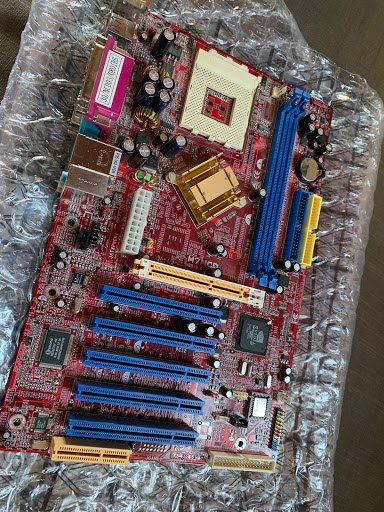 MSI K7N2 - eBay $45 - This is what I'm using currently. Seems to be slightly more capable than the BioStar as more overclocking options are available in the BIOS. 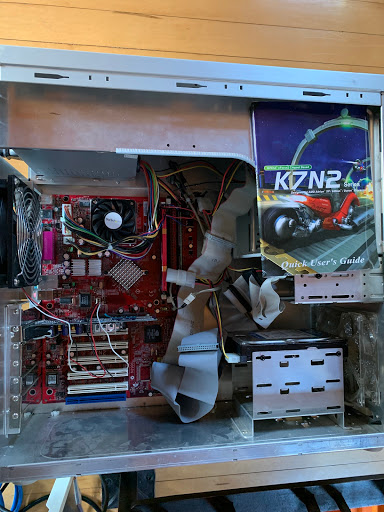 Athlon 2000+ - Not using, came with the BioStar motherboard.

The 2500+ is the most coveted overclocker from that product line, cited by Tom's Hardware as one of the top 14 legendary overclocking chips, and covered by plenty of press at the time. It's likely that AMD never intended for this to be a hobbyist chip, but who knows.

I picked up a $4 basic Socket 462 cooler from RE-PC which I'm still using. The fan wouldn't start up unless you reached in the case and gave it some encouragement, so I replaced the fan with a new one. It's working OK.

I also ordered this oddball cooler - AOC Majesty Twins - $28 from eBay. It looks cool, and with two fans maybe it will perform better than the near-stock cooler. 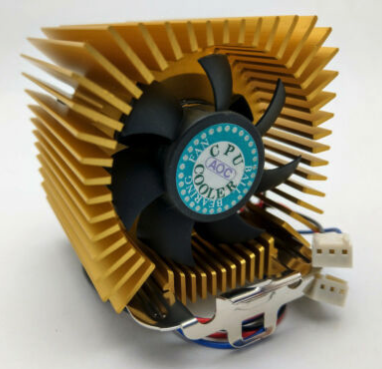 I couldn't find any radiator-style air coolers for the Socket A, nor any liquid cooling. Radiator-style coolers may not have been available or popular at the time. Now we know it's all about surface area. There is a Zalman floating around on eBay - Zalmans were the best coolers at the time - but I'm not sure if it will fit the motherboards I have. This may be the best I can do for a little while.
Graphics Cards

I spent some time (maybe an hour) picking the AGP graphics card bin at RE-PC and found a 256mb Radeon 9550 XL for $3. I was overjoyed when I got home and read that the card had great overclocking potential, as you could generally double the core clock and bring it up to a 9600XT, as long as you had the right cooling. 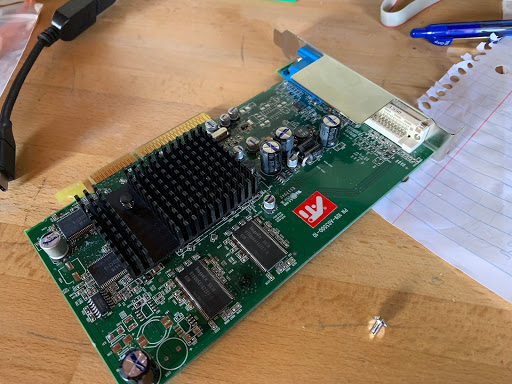 When I booted up with the Radeon, I was met with some pretty extreme artifacts: 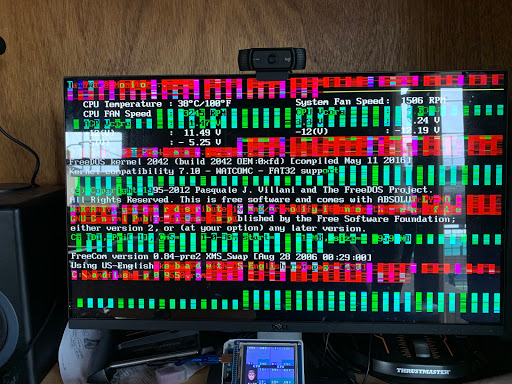 I wanted to try everything in my power to fix this card. The problem could be a corrupted BIOS, a short somewhere, a blown cap, or a fried IC. My power is pretty much limited to soldering blown caps or flashing the BIOS. The caps looked fine, so I tried flashing the BIOS.

Flashing the BIOS using command-line tools proved to be exceptionally difficult when you can't see what you're typing. Eventually I could run the tools by running them from the command line, remotely, over a VNC connection, but the tools never discovered the card.

At that point you have two options to flash the BIOS. One is the "Pin 1-8 mod" where you short out the BIOS chip, disabling it during startup so that the flashing tool will recognize the right card is installed, and then cut the short while the machine is running to allow writes.

The other technique is to use a solder less clip-based flash chip interface to flash the BIOS chip. I decided to try this. Luckily these flashing tools are really cheap and could be useful again someday.

Techpowerup.com still maintains a library of old and new video card BIOS roms. I found a few for the 9550 and started flashing. No luck, it’s still glitchy as fuck.

I accepted defeat and ordered a replacement card (only $26).

I am also considering getting a Quadro FX 3000. They can apparently overclock as high as the GeForce 5900/5950U which were the best performing graphics cards in their day.

Waiting for the replacement graphics card to ship, I tried overclocking the XP-M 2800+ with the stock cooler.

The chip is rated for 2.13 ghz. I can get up to 2.3 ghz stable so far. This is my best stable configuration:

I'd really like to get an FSB of 200mhz or higher. In my experience, RAM tends to have better performance with higher clock speeds and equivalently longer timings. But so far, 200mhz is an unstable FSB speed.

Since FSB seems to be the limiting factor right now and the multiplier is maxed out, I am going to try the pin mod to unlock the multiplier even higher (probably on the other backup motherboard first).

Posted by Dylan Rush at 1:23 PM No comments: